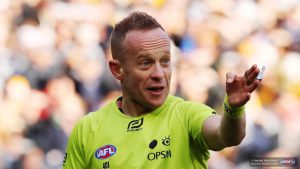 Link to story over at USAFL.com

The USAFL Umpires Association will once again be hosting a pre-Nationals umpiring clinic from 1-5pm on Friday, October 11th at the Premier Sports Campus at Lakewood Ranch in Sarasota-Bradenton, Florida.

The clinic is free and open to all current umpires as well as those interested in learning.

The USAFL and USAFLUA are once again excited to welcome four AFL field umpires – Shane McInerney, Ray Chamberlain, Chris Donlon, and Hayden Gavine — who will be helping conduct the clinic as well as observing the tournament throughout the weekend.

The USAFLUA will also be presenting its certifications for field, boundary and goal umpires on the weekend.

For more information on the umpiring clinic and the USAFLUA, visit USAFLUA.org.